The struggle is slow and hard, and progress can't always be seen as it occurs. But sometimes history provides helpful context. I have been reading this week about a controversy in the 1980s about whether the UBC Bookstore should continue to sell pornography. To my contemporary sensibilities, that there should ever have been controversy about whether the UBC Bookstore should sell pornography is barely imaginable.

Lance Read, an Education student at UBC in 1982, wrote this letter to UBC's student newspaper, the Ubyssey:


I would like to see our bookstore, an official arm of the university, discontinue the sale of printed matter that is socially offensive, degrading and unnecessary in an enlightened world. To my knowledge there are only two publications for sale in the UBC bookstore which concentrate on such degradation. Penthouse and Playboy magazines publish photographs which focus on posing women in submissive and degrading positions. Those of us who recognize the natural and valuable relationship that women and men share as equals struggling to retain respect for all social groups, will no longer condone through silence, such degradation. I therefore ask our bookstore to stop the sale of Penthouse and Playboy. I feel that this is justifiable censorship. I suggest as an alternative that the bookstore purchase reprints of socially inoffensive articles from both publications and make them available for resale.

You can find this letter printed on p. 10 of the Nov 19, 1982 edition here. I am amazed that the UBC bookstore was ever selling pornographic magazines in the 1980s—Read's position seems incredibly obvious in retrospect. But even more astounding is the response that one John Hedgecock, UBC Bookstore Manager, seems to have offered to Mr. Read. (I have been unable to locate this response in the online archives, but Lance Read has sent me his own copy.)


As a general rule the UBC bookstore has a non-censorship policy, especially in regards to material ordinarily available in public stores in Canada. The two magazines in question meet this criteria. Other perhaps more controversial material is handled on a case by case basis.
I would suggest that points made in Mr. Read's letter are more a matter of personal opinion. To paraphrase Shakespeare's 'Beauty is bought by judgement of the eye'—lets us say—art is in the eye of the beholder. Nude photographic art is art.
As a note of interest, I know personally that there are usually a few copies of these magazines available in the locker room of the Thunderbird rugby team on which Mr. Read plays.

(My emphasis.) The dismissive sneer comes through loud and clear in the prose. As if the idea of this material's being inappropriate was completely beyond the pale.

Although I didn't find this letter online, I did find clear corroboration that Hedgecock was unsympathetic to Read's request—which echoed a call that Education instructor Josephine Evans had been making for some time—see e.g. p. 1 of the October 10 1982 Ubessey. I am not sure what happened to this controversy in the end. The latest reference I found was a March 1983 discussion of a petition to the UBC board of governors to ban pornographic material from the UBC bookstore (p. 1 here). I don't know whether the ban was put in place, but I can report that I have never seen any pornography in the UBC bookstore.

Which isn't to say there's not still work to be done. Here's a photo Carrie Jenkins took at the UBC bookstore last fall (used with her permission). 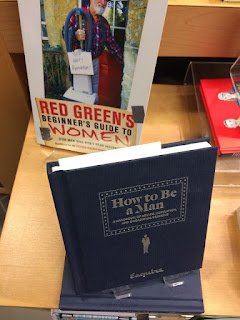 That's How to Be a Man: A Handbook of Advice, Inspiration, and Occasional Drinking, and Red Green's Beginner's Guide to Women: For Men Who Don't Read Instructions. So yes, we've got the activity of manhood and women as objects, at the UBC bookstore, in 2015. See also this classy item, photographed by Moira Wyton‎ at the UBC bookstore, also in 2015 (used with permission): 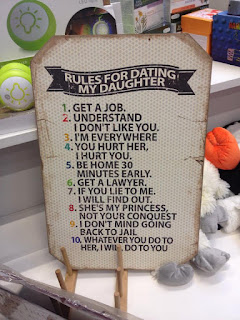 Among its many objectionable qualities is a hilarious lighthearted threat of sexual assault.

So I guess maybe they haven't quite stopped selling "printed matter that is socially offensive, degrading and unnecessary in an enlightened world", but at least the bar seems to be moving in the right direction.

Maybe in 2050 the UBC community will look back and shake their heads, marvelling at the idea that anybody ever thought this was appropriate material for a university bookstore. A guy can dream.
Posted by Jonathan Jenkins Ichikawa at 1/24/2016 09:50:00 PM
Email ThisBlogThis!Share to TwitterShare to FacebookShare to Pinterest
Labels: feminism, history, pornography, ubc