On the Very Idea of a Religious Minority

A minority group is a group that comprises less than 50% of the total population. Draw the pie chart. If your part is defined by an acute angle, your group is a minority one; if its shaped like Pac-Man, you're part of the majority. 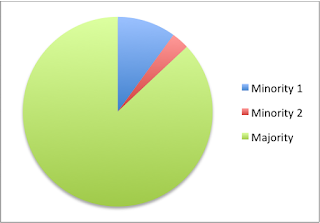 Even holding fixed the total population, whether someone belongs to a minority group or not depends on what kinds of groups are relevant. For example, among faculty members in my department, I'm in a gender majority, because I'm male, and more than half of the faculty members in my department are male. With respect to certain natural ways of carving out dietary restrictions, I am a minority, because I'm a vegetarian, and fewer than half of the people in my department are vegetarians. This kind of 'minority-relativity' is obvious, and not something people get particularly confused about. There's no one absolute answer to the question of whether someone is part of a minority—it depends on what kind of categorization you're interested in.

But there's another kind of minority-relativity that's easier to overlook. Someone's status as part of a minority doesn't just depend on what kind of category you're talking about. It also depends on how finely you're carving up the distinct options. Suppose, for example, that you're interested in the question of whether someone is part of a religious minority, relative to their nation of origin. (Donald Trump attempted to make this a central question for many people's refugee statuses.) If you're going to give special treatment to religious minorities, then it turns out that it matters quite a lot what you count as a religion.


Here's one way to characterize the approximate religious demographics of Syria. 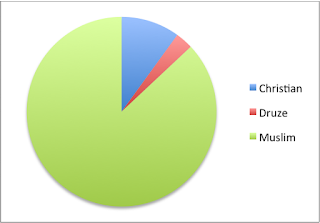 This chart is the same as that above. (I'm getting my numbers from here.) If this is how you carve up the pie, the Christians and the Druze are religious minorities, and the Muslims aren't, because they make up 87% of the total population.

But religions are complicated things, and their individuation conditions are not straightforward. This chart is assuming that 'Christianity' and 'Islam' are names of particular religions, such that everyone who falls under one of those titles has the same religion as everyone else who falls under it too. When I was a child, I grew up in an Evangelical Protestant Christian tradition. We were taught that Catholics had a different religion from us. (Certainly Catholicism was once considered a religious minority in the US.) We were actually taught that Catholics weren't Christians. As a semantic fact this seems implausible. But saying that Christianity isn't just one religion, but rather a name of a family of religions, doesn't seem obviously objectionable.

The same goes for Islam. People who fall under the category 'Muslim' fall into more specific subcategories, which include significant theological differences between them. For example, Sunni and Shia Muslims disagree about the proper successor to the prophet Muhammad. Should we think of Shia Islam and Sunni Islam as two different religions? Or should we think of them as two different branches of the same religion? It's not obvious to me that there's a metaphysical fact here; one can carve up religions in any of a variety of ways. It's purely conventional which way you choose.

The trick is, this apparently-arbitrary choice will matter a lot if, like Trump's executive order, you think the question of whether someone is a member of a religious minority matters. If all Muslims have the same religion, then the chart above is the right picture of Syria, and the Christians and the Druze are the ones who get special priority. But what if you think Shia Islam and Sunni Islam aren't the same religion? Then your chart looks like this. 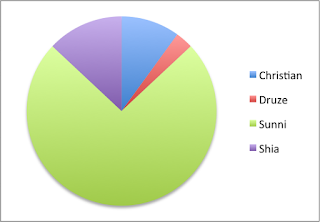 Dividing the religions up more finely—what looks like an inconsequential, purely terminological choice, turns over 2 million Shi'a into a religious minority. Whether, on Trump's policy, Shi'a would be given preferential refugee treatment depends on how finely one individuates religions. And of course, one can divide things up even more finely. If you divide up the Sunni into Arabs, Kurds, etc., you count even more people as part of a minority. (If you keep going, and shrink the green wedge past 50%, everyone ends up in a religious minority.)

One possible reaction would be to decide that after all, there is one uniquely right way to decide whether two religious traditions count as the same religion. Going back to the Christianity case (because I'm much more fluent in talk about those traditions), this would mean that there's just an objective fact of the matter about whether Catholics and Protestants have the same religion, and, if so, whether it's the same one as that of, say, Mormons, or Haitian Vodouists. This seems to me somewhat incredible. I can't think of any plausible principle that has a good claim to being the one true way to individuate religions.

Consequently, there also seems to be no one true way to tell who is or isn't a member of a religious minority. So this is a category we shouldn't ask to carry too much weight. Maybe, for example, we'd be better off not making law in terms of that category.
Posted by Jonathan Jenkins Ichikawa at 2/12/2017 06:35:00 PM
Email ThisBlogThis!Share to TwitterShare to FacebookShare to Pinterest
Labels: donald trump, joint-carving, majority, minority, religion